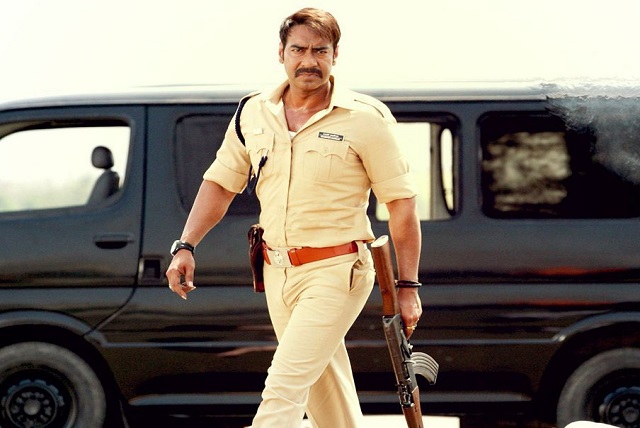 In one line, the film Singham Returns is, as we call it, ‘Paisa Vasool’ – which means an entertainer. Directed by Rohit Shetty, ‘Singham Returns’ is a sequel to ‘Singham’ which was released in 2011 and had Ajay Devgan in the main lead.

Bajirao Singham (Ajay Devgan), an honest cop who cannot be bribed or broken, is transferred from his village Shivgarh to Mumbai as the Deputy Commissioner of Police and is given the free hand to wipe out corruption and all the dirt off the roads.

Following the assassination of his mentor the Guruji (Anupam Kher) and the death of a co-worker who is found dead with loads of cash, Singham takes on the load of proving the innocence of his junior officer and his mentor. The investigations lead to the involvement of a powerful Godman (Amole Gupte)  who is fake and a dishonest politician (Zakir Hussain) but as they are very powerful it is almost impossible to prove them accountable.

The whole police force unite and take matters in own hands as the pressure from the higher authorities is tremendous. Then the larger than life action begins…

In true Rohit Shetty style there are cars flying all over the place, explosions and gun shots dominate the screen and dialogues “Atta Majhi Satakli” and “Ek ek ki ulti ginti shuru” echo in the halls. There is overuse of Marathi which could have been avoided. The background score and the music appear as good as not being there. They are garish and totally avoidable.

There are some amazing moments of police pride which takes the cake and gets the hooting in ‘Singham Returns’ and so does Ajay Devgan. Kareena Kapoor plays the role of his love interest which wasn’t required in the script and she is also looking so much older to Ajay Devgan.

Anupam Kher, Zakir Hussain, Mahesh Manjreker and Amole Gupte come up with good performances and Ashwini Kalseker has added a lot of strength to the character she plays as a journalist. Another one worth mentioning is the character of ‘Daya’ played by Dayanand Shetty who is very popular for his role in the serial ‘CID’ on Sony TV. He takes a lot of whistles and claps.

Some scenes are very good and well presented especially the one where the mother of a teenage son faces Singham and tells him to go and confront the politician who pays them to vote for him. Ajay Devgan does walk away with the cake but sadly the story is as predictable as it can be.

One time entertainer ‘Singham Returns’ does leave an impact on the Box Office.