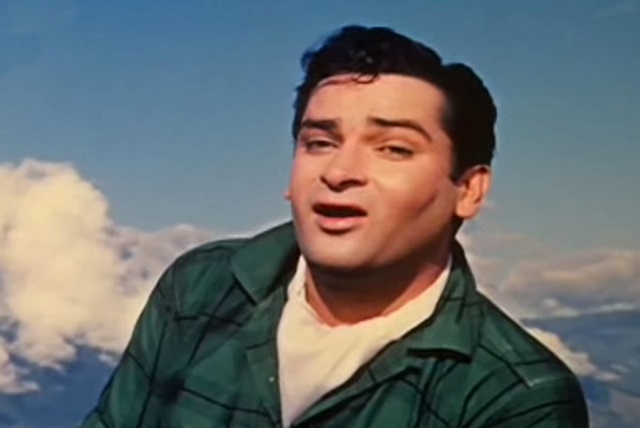 On 21st October, 1931 rose a hero called Shamsher Prithvi Raj Kapoor whom we fondly know as Shammi Kapoor. A leading actor and Director he shone to glory and sky was the limit.

It feels like yesterday when we heard that he’s no more. The other day I saw Rockstar and he did shine out in his small role in that movie. He spoke and his eyes still burnt the screen as they always did.

Fondly remembered as the man who changed the styles of choreography in those days as mostly he did all his dance moves himself. The amount of energy he put into a song was so remarkable… It was like bringing a song to life… on this Shammi Kapoor once said..”I never learnt how to dance; never had a dance master. When I was 18-19 years old, I joined a dancing school in Dadar to learn Tango. They used to charge Rs 20 for an hour. After spending Rs 100, I realized that I hadn’t learnt anything. But I always gave expressions as required to my songs.”

The Legend called Shammi Kapoor gave us so many outstanding movies and brought a huge change in the existing pattern of cinema in his days. His strong screen presence is still not matched by any… the one who revolutionized the existing image of the hindi film hero in those days.

Shammi Kapoor was the second son of Prithvi Raj Kapoor (who himself was a legend– One day I shall write on him too) … Born in a family of great actors and loads of talent did manage to create a niche for himself. He had to lead a tradition of “The Kapoor’s”… the audience had major expectations being sibling of Raj Kapoor … which he did fulfill.

As he joined the Prithvi theatres in 1948 – he never looked back… Bollywood engulfed him in 1953 and since then he flew the flight of the eagle… Gave us a lot of movies I still love watching and a few foot tapping numbers which force you to stand up and dance… through enjoyment… Full time paisa vasool is what I call his movies…!!!

How an icy green blue colour can be so fiery I don’t know. But it was.

Shammi Kapoor has been known for his lunatic moves and mad crazy energy. When you talk Shammi you think of Yahoooo, sukku sukku, o haseena zulfon walee, aaja aaja main hun pyaar tera and other such mad cap numbers.

I grew up in the 80s (born ’73) as a big Shammi  fan. I was ridiculed and made fun of by my peers who could not relate to this blast from the past. So many years later I look at him and I think what I like most about him is his eyes. Twinkling when naughty and haunting when sombre, he could look into his girl’s eyes and melt any ice maiden.

Truly, he could steal a heart just by looking into the persons eyes. If you want to experience ice that burns then you only need to pick up his movies.

In the words of Shammi Kapoor – “Those were happy movies…hero meets heroine, chases her, used to sing 7-8 songs for fasaoing {impressing} her, then last mein Pranji ki tarah ek villain bhi aa jayenge. The hero has a climax fight with Pran to save the heroine. And at the end, the lovers are united. I belong to the era when films were simple, they didn’t tax your brains”

An internet savvy hero as he was for many a years now tweeted on his Life… ‘It has been a beautiful journey with different shapes and a lot of nice colours with certain shades of grey and the dark moment of black when I lost my first wife. But overall I am very grateful to God for the life he has given me.’

I shall end this with a beautiful quote by Hrithik Roshan, “Legends like Shammi Kapoor do not die… he lives, inside us…around us…. A journey such as his should be rejoiced… not mourned… Of course we’ll miss his physical presence terribly…but his magic lives on within you and me…n I will make sure my sons know the SUPERSTAR their dad admired and love the most…thank u Shammi Uncle….and for you, I don’t want to say R.I.P, but rather D.I.H …dancing in heaven now…I love you…”

Some people do live forever… And he is one of them.

Tarusa art: Beginning of a new journey into fashion world

Songs to hear while travelling, romancing on wheels