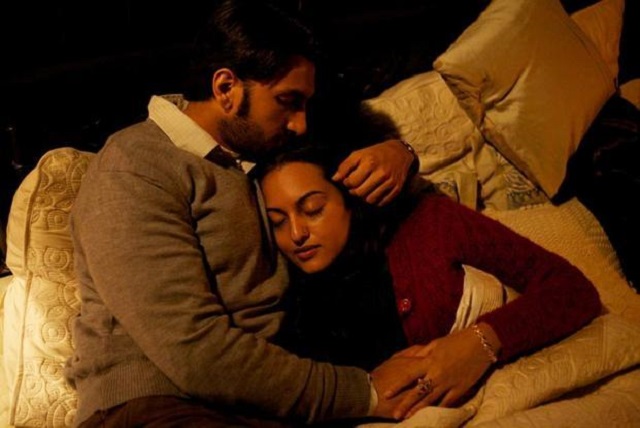 On the 5th of July, the movie ‘Lootera’ is released. I go to the hall to see the movie with a group of six for a late night 10:40 pm show. And guess … what happened that night has never happened before. We realize that by mistake we were given the tickets for the next day 10:40 am show by the man on the counter!

We decided to sit and by sheer luck we separated into two groups of three each and would you believe my prayers worked. They did not catch us as they were looking for a group of six people. Though it was not our fault but we would have missed the movie and who wanted to do that. Oh! What a feeling!

‘Lootera,’ a period romance film directed by Vikramaditya Motwane with Ranveer Singh and Sonakshi Sinha in the lead roles takes us back into the 1950s. Come to think of it making a period film takes a little more than the normal as every minute detail is looked into.

‘Lootera,’ a movie in which love is expressed mostly by eyes and in silence as it speaks loudly.

The love story of Pakhi (played by Sonakshi Sinha) and Varun (played by Ranveer Singh) depicts the old school of romance when love was not just touching each other.

The fun of loving, the laughter, the spark in the eyes, the sweet pain which pierces your heart, that mushy feeling which lingers on, the uncertainty loves me loves me not, that special gooey feeling called love is what pours out in Lootera.

They quietly steal glances from the balcony, share cups of tea and the cups are not to be missed, across the dining table they look and the big fan used in the old times which were manual are not to be missed either, the cutlery so beautiful as they read poetry out to each other. – Love shared in many a quiet ways.

‘Lootera’ shows the 1950s in their full grandeur and a shining Kolkata takes your heart away as their love blooms.

Pakhi her bubbly self does a lot of things to get his attention and Varun enjoys all but does not give in to her love.

Then they part ways and he steals, along with her heart many a things he walks away with, some knowingly and some unknowingly.

The story then takes us to the old charm of Dalhousie and they meet again and love unfolds.

According to the director Vikramaditya Motwane, the shooting at Kalatop in Dalhousie was the toughest to complete due to heavy snowfall. They had to go there three times to finish their sequences in the snow.

The script writing started in the late 2003 and I would say it was worth the wait.

The cast includes Ranveer Singh as Varun Srivastava, Sonakshi Sinha as Pakhi, Barun Chanda as the Zamindar, Adil Hussain as K.N.Singh, Arif Zakaria as Bajpai and Vikrant Massey as Dev.  Music is by Amit Trivedi and it aptly denotes the time and period shown in the movie. The cinematographer did an amazing job in ‘Lootera.’

There are many a flaws in Lootera but the good part is you are okay with that as overall it is brilliant. It could have been better if the lead pair had a little more chemistry between themselves.  The movie would have risen to a different level. But kudos to Vikramaditya Motwane for doing this splendid job called ‘Lootera.’

A new trend seems to be taking Bollywood over and that is of our heroes being tragedy kings. If you closely look at it isn’t ‘Lootera’ especially the second part similar to the recently released ‘Ranjhanaa’… is it just a coincidence or is this trend taking the whole Bollywood along!!!