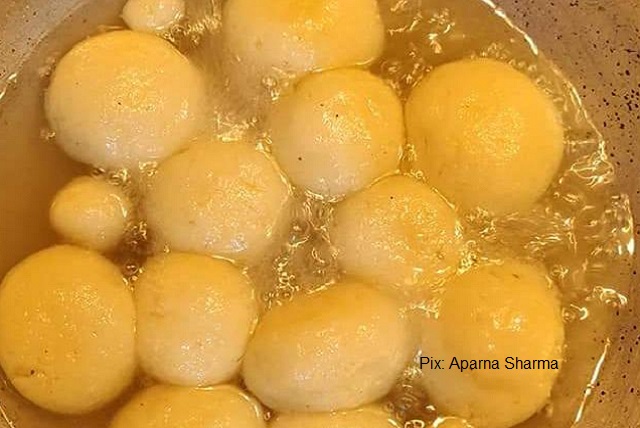 I kneaded the chenna and cooked the sugar syrup simultaneously. It saves time this way. But one can also prepare it step by step. What ultimately one gets is a rasgulla.

When it is ready, you can smell the freshness of sweet rosewater from a distance.

The taste buds begin to tickle and with that mild sugary fragrance, your mouth begins to water.

Constantly fixing a gaze over the rasgulla, you swallow in the rush of saliva that has been immediately secreted from below the tongue.

In the time between you feel the wetness of the soft rasgulla by squeezing it a little with fingers and the rasgulla reaches your mouth, you do not tend to think about where has it come from- Odisha or West Bengal, where a bitter war rages between the two over rasgulla’s sweet GI tag.

Several years and debates and claims and accusations later, neither a Bengali, nor an Odia has given up the belief that rasgulla was invented in their respective state (though GI tag for rasgulla was given to Bengal).

While some debated whether rasgulla was ‘invented’ in Bengal, Odisha or Iran, others put forward suggestions of either creating multiple GI tags, or one national GI tag for the same.

On a different note, only they cry over souring split milk who do not know how to make rasgulla out of it.

For me rasgulla or rosogolla is a sponge. Ras plus Gulla. Syrup plus Chhena Ball. And I can take a discussion on rasgulla out of the dining table to a battle field arguing… that a rasgulla should be taken all and at once.

Cutting a rasgulla by a spoon or a knife is a crime. It must be relished all together, for its sponge experience.

After all, our cosmonauts munching on spongy rasgulla while levitating in outer space would hardly bother about its origin or a bitter fight on terra firma down below.

For them, the divine flavour of rasgulla is enough to make them tearful while making them nostalgic about their motherland.